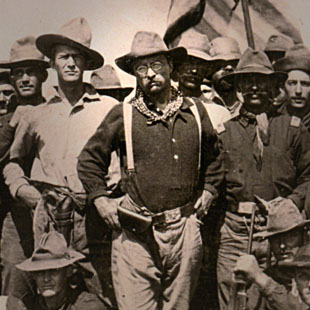 Upon reading an article in the New York Times about actor Tom Berenger, I went on YouTube and watched the 3-hour TNT Mini-series “Rough Riders” about our 26th President, Teddy Roosevelt. What a story. I am a huge TR fan anyway, having read at least ten books on his life. My favorite was the Pulitzer Prize-winning book The Rise of Theodore Roosevelt by Edmund Morris. A few years ago, I visited his home, Sagamore Hill, now a museum on Long Island. They had to kick me out.

Teddy was a force of nature, larger than life in all he did. He had no equal, he was peerless. Some say, one of the 20th century’s great leaders. You ei-ther loved him or you hated him. Edith Wharton wrote, “If you are spread-ing light to the world, it may be accomplished two ways, be the candle or the mirror that reflects it.” Teddy was both. His daughter, Alice, once said, “He wants to be the corpse at every funeral and groom at every wedding!”

Here is my short list of admirable leadership qualities TR possessed. How many could improve your leadership skills in your business?

Our 26th president was the brightest candle and biggest mirror of the 20th century. There will never be another “Teddy.” A true man of destiny. I need to watch that movie again… it’s so “bully!”