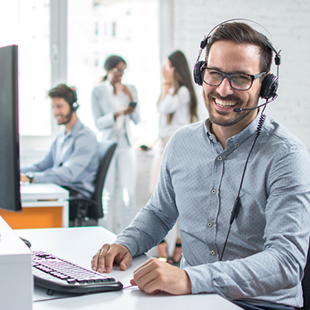 “The top salesperson in the organization probably missed more sales than 90% of the salespeople on the team, but they also made more calls than the others made.” -Zig Ziglar, Author, Speaker

Sales is an art and a science. The art constitutes the soft skills. The science deals with the numbers. How many calls do you make each day, each week, each month? I interviewed Pat McCarthy, author of The Nordstrom Way shortly after that amazing book was released. He told me over breakfast, “The turning point in my sales career came when I committed to making 40 calls a day, no matter what!” I don’t care what you sell. If you make 40 calls a day, you will be wildly successful in sales. Pick a number. Five, ten, fifteen, twenty calls a day. The key, especially if you are new to sales, lies in making the calls.

I was 23 years old when I started my chimney cleaning business. I ran into a chimney sweep one day on Queen Anne Hill in Seattle one April. April is a slow month for chimney sweeps. As we talked (he was covered in creosote and had just finished cleaning a chimney) he asked me why I wasn’t working. “It’s slow,” I said. “Nobody cares about chimneys in April.” He looked at me as if I had two heads. “That’s simply not true. If you knock on enough doors, you will have all the business you can handle.” He went on to tell me that after cleaning a chimney he knocks on twenty five doors handing out business cards or until someone says yes. It was a paradigm shift for me. From that day forward I convinced repeat customers to let me clean their stoves and chimneys in the spring leaving the fall open for new customers; and I knocked on 25 doors after every cleaning. Business boomed.

Frank Bettger in his classic sales book How I Raised Myself From Failure to Success in Selling writes:

“You can’t collect your commission until you make the sale;

You can’t make the sale until you write the order;

You can’t write order until you have an interview;

You can’t have an interview until you make the CALLS!”

I was a technician for ten years. I accepted an offer to sell full time. The reason I had success my first year in sales was simple. On the advice of my friend Les (who made the president’s club at Xerox five years in a row) who advised me, “If your boss tells you to do two proposals a week, you do four!” I did five a week! Every week! Although my close ratio was only 25% that first year, I was 150% of plan. The reason? Activity. I made the CALLS.

“Pretend that every single person you meet has a sign around his or her neck that says, ‘Make me feel important.’ Not only will you succeed in sales, you will succeed in life.” – Mary Kay Ash, Cosmetics Pioneer

“I love working with customers. Sales has really influenced everything I do. It has instilled in me the important traits of operating with a sense of urgency and listening to people.” -Jeffrey Immelt, CEO, GE

“Goals aren’t enough. You need goals plus deadlines: goals big enough to get excited about and deadlines to make you run. One isn’t much good without the other, but together they can be tremendous.” -Ben Feldman, Life Insurance Superstar Sales Pioneer

Here are three simple suggestions to increase your sales this next year:

Tom Watson Sr., the founder of IBM, told his salespeople in the teeth of the depression, “Double your failure rate!” If you see twice as many people over the next six months, you will learn everything you need to be successful. Ask yourself in your journal after every call: “What did I do well on this call?” and, “What could I improve?” It won’t be long. You WILL be the top producer in your company.

Take it from a former Chimney Sweep… just make the calls. You will be glad you did!